As I approach completion of my first typeface, I realize that I’m going to need an End User License Agreement (EULA) in order to license the font. Unfortunately, I don’t think I can afford a lawyer to write a EULA from scratch, though I’m going to need to hire one to look it over at least.

In order to find a EULA to plagiarize, and in an effort to understand more of what it is a EULA is doing, I went out and read a couple dozen license agreements from various foundries, and took notes along the way. This post is my takeaway from that experience.

In this post I’ll run through what I observe to be the most common anatomy of a EULA, and make observations about what I like and don’t like. Note that I AM NOT A LAWYER, AND THIS POST DOES NOT CONSTITUTE LEGAL ADVICE.

Below I’ll lay out the common elements of a EULA, with a brief description if it isn’t self-explanatory. Below this outline I dive deeper into the sections with which people have issues or differences of opinion and practice.

Okay, so this part of the EULA isn’t contentious, it’s just important, and I particularly like how some foundries go about explaining it. Monotype explains it well:

When you license a font, you are not buying the font outright. You are acquiring permission to use it subject to the terms of the license agreement.

A number of foundries under the Village co-op use this language:

What you are purchasing… is the license to use digital typeface software… You are not purchasing the copyright to the design of the fonts, but the rights to use the fonts.

Commercial Type explains it this way:

This license grants you the right to use our fonts, but ownership of the fonts (both the software describing the design and the design itself) belongs to us.

My favorite way of making this clear, though, has got to be Matthew Butterick’s EULA. I like his use of the term “my fonts” instead of “the software” or some such throughout the document to refer to the fonts. It reinforces the idea that ownership and intellectual property rights belong to him, not the user.

The font has to be installed on a computer. It used to be that the word “desktop” was used (hence “Desktop License”). But does that discount laptops? So instead EULAs referred to the number of CPUs (Central Processing Units). But then you could install it on a server and access the font via a number of terminals. So then there was explicit language excluding server use, and perhaps using a separate license for that.

What if I’m someone who takes work home on a laptop? (Yeah, sucks to be me; I have no work/life balance.) Some EULAs allow for me to use the font at work and on a home CPU, so long as I never use both simultaneously. (This is rare, but I can see both the danger and the appeal.)

Based on this thinking I personally like the idea of licensing based on number of users, rather than CPUs. However, I understand that sometimes there are multiple people using one machine, but if so, they aren’t going to be physically able to use the font any more than would a single person on a single machine.

Again, I’ll give a shout out to Matthew Butterick. His EULA reads:

So in this case, a license might cover 1–5 users. In which case, as the license buyer at home for personal use, I could let my partner, parent, and kids use the font on a computer or computers, just so long as the number of users doesn’t exceed 5.

Apparently this used to be an issue? I haven’t yet seen a EULA that doesn’t include provisions for a backup copy. The differences lie in how many backup copies (usually one, sometimes “A reasonable number”), or how strongly worded the message is to protect the backup.

Most EULA’s make allowances for vendors and service bureaus. I mean, you want to print stuff, right? Otherwise, what’s the point? So assuming the licensee can embed my font in a PDF or otherwise lend the font to a vendor for the purpose of printing, what other third parties are allowed?

I’ve only seen a couple of generous EULAs that allow for contractors/freelancers/temps to use the font software. In these cases they are only allowed to use it for the license holder’s work, and they have to be covered under the maximum number of users for the license.

Any double edged sword is something the foundry needs to take into consideration. If it’s double edged, that goes for the foundry as much as for the licensee. Yeah, the licensee might be liable for breech of contract, but will the foundry be able to catch that, let alone prosecute it? And even if so, will it be worth the potential damage? Or is a generous provision a jar of honey to catch more flies? Will the number of licenses sold outweigh the number of licenses lost through negligence?

§6. Additional Licenses Based on Use (Desktop, Web, App, etc.)

Everyone at this point seems to be used to the idea that there are differing licenses for different uses and/or technologies. At the very least, the division between desktop and web seems to be clear. There are even different file types for each of those, so I can’t even readily use one file for the other purpose (OTF vs WOFF for example). More and more, though, there are separate licenses for app and/or embedding. This mostly covers use in software.

Desktop use is static—I can’t make the text change once it’s set in ink. Web use is dynamic in as much as it is changeable by the licensee–I can’t change a printed book, but I can change what my website copy says, even if I’m not necessarily permitted to give the website user the ability to change the text. App use is very much akin to web use, but the font software is served in a different way.

There are myriad other ways font software gets used: embedded in hardware like a kiosk or game console, video or broadcast, ePublication, server-generated dynamic content, etc. All these modes have similarities and differences. The question ends up being, which differences matter enough for me to make separate or additional licensing provisions or restrictions?

I think I will write a whole other blog post covering the above question. It’s super complicated, everyone has their own answers, and there’s not a whole lot of consensus around it, especially since changes in technology continually complicate the matter.

Restrictions on font use are many and varied, but there are two main categories of restrictions:

Category 1 is pretty easy, and generally agreed upon. I say generally because there are always exceptions by generous foundries. Things that fall under category 1 include (but are not limited to): modification, derivative work, sublease/reselling, splitting/unbundling, and transfer.

Modification. Generally foundries don’t allow modification of their work. There’s good reason for this: if someone makes a modification, then that modified font may have inferior workmanship or errors, and can proliferate when copied or transferred. (And you know it’s going to get copied and transferred.) Sometimes if there’s a technical or practical reason to want a modification, then foundries will allow people to ask for permission, or more likely, will charge a fee so the foundry change the font, which the licensee can use in a legally restricted manner.

Derivative Work. Along the same vein as modification, if someone uses the design of the font (whether letterforms or software) to make their own thing, that’s not okay. I worked really hard for a long time to make this thing, you don’t get to take my hard work and claim it as your own.

Sublease/Reselling. Even worse than derivative work is just straight up stealing. That’s what charging money for something you have no right to charge for is: theft.

Splitting/Unbundling. When multiple fonts come packaged together as a family or package, they are bundled. The process of separating those files is splitting. This happens when a font might be packaged to go to a third party printer. (This is generally acceptable, and doesn’t necessarily count.) Worst case scenario, someone is splitting the font to sublease or resell the parts they aren’t using.

Transfer. Transferring the license of a font to another party is often not allowed. However, some foundries stipulate that it’s fine to transfer a license, so long as:

If there is a separate license or a license upgrade required for a thing, then that’s a restriction based on use (category 2). Restrictions arising out of questions from §6 of this post fall under this category. I’m not going to write about that in this post.

I will mention two examples of use-based restrictions:

Creation of customizable designs or products. If someone allows people outside the license buyer to create customizable products using the font or it’s designs (whether PDFs or shirts or whatever), then that is generally prohibited by the EULA or requires additional licensing.

Selling stuff whose value is derived chiefly from the font and/or its design. So if someone made a pillow using the shape of my ampersand, or had a shirt with just a single glyph on it, those things derive their uniqueness and value primarily from the design of the letterforms.

Darden Studio’s EULA has my favorite example of this in their EULA:

The Font Software is not permitted to be used in letterform products…including…as house numbers or alphabet soup noodles.

This is as opposed to work whose value lies in the user’s content. If someone is selling a PDF with a bunch of information on it, and it uses the font for whatever reason (branding maybe, or perhaps just aesthetic choice), the text could all be changed to use a different typeface and the product is still essentially the same.

Essentially, the licensee needs to ask themself, “Would this be the same product if I used a different typeface?” If not, don’t use it that way without permission (and most likely a license upgrade).

So this post is on the long side, but is still just a drop in the bucket of all things EULA. While it’s also very helpful to just read every EULA you get (most people don’t but should), this post gives an overview of what’s in a EULA and covers some of the juicier bits. However, the juiciest bit is yet to come.

In the next post I’ll be getting into the weeds around supplemental licensing and use-based restriction. This topic brings up most of the hard questions to be answered when putting together one’s own EULA. Stay tuned! 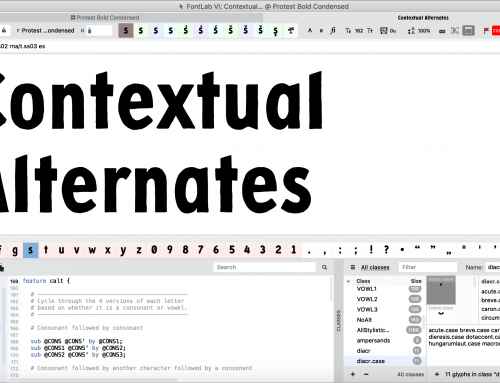