This is a three part series on how to talk about letterforms. Basically, it’s a glossary. This first part deals with the Anatomy of Letterforms, what the pieces and parts are called. Part 2 covers Process, the terms for the ways letters are made, whether by hand or by computer. Part 3 is Categorization, the ways groups of glyphs are labeled by form and function.

This is by no means exhaustive, but it’s a good working terminology for anyone creating with letters.
(It is my intent to add to this gloassary over time, so that eventually it may be more comprehensive.)

Abrupt serif—a serif with no bracket. 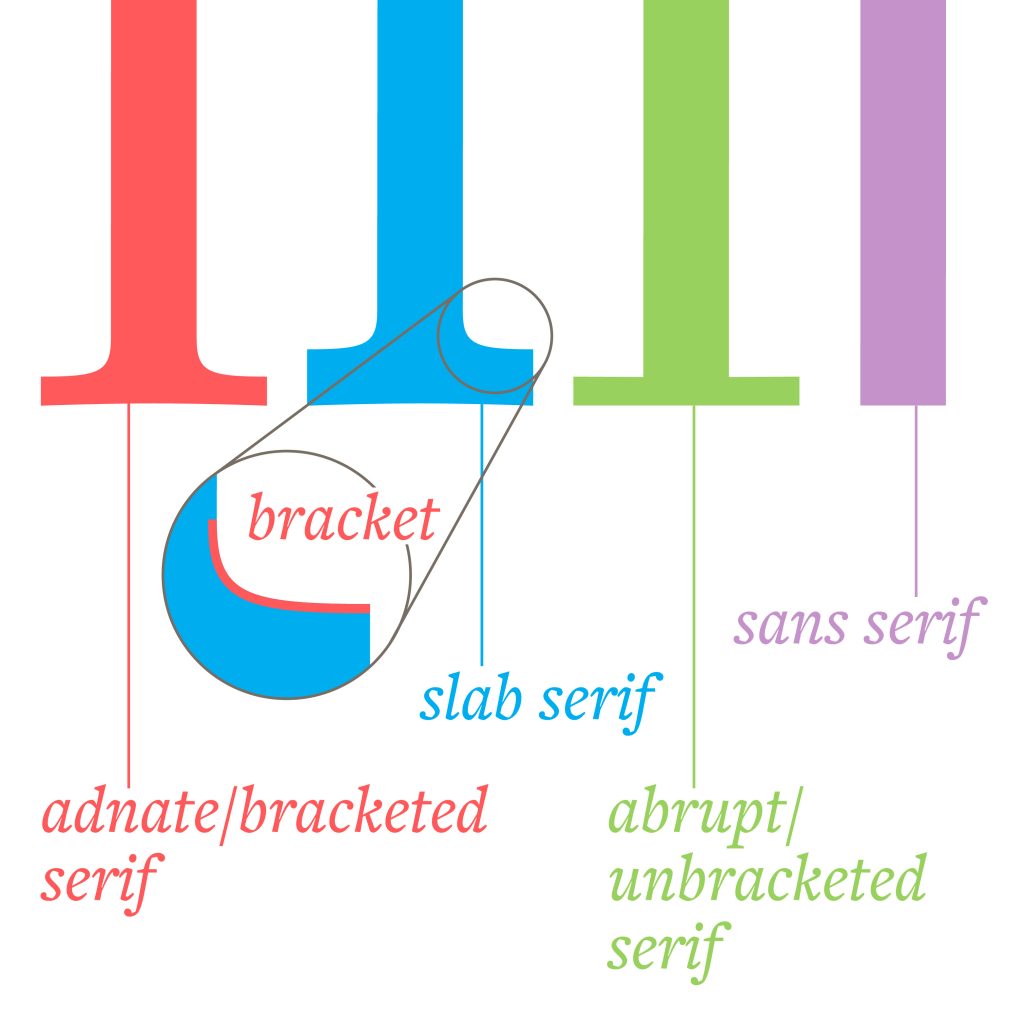 Aperture—a not entirely closed, somewhat rounded space within a character (such as in ‘c’). 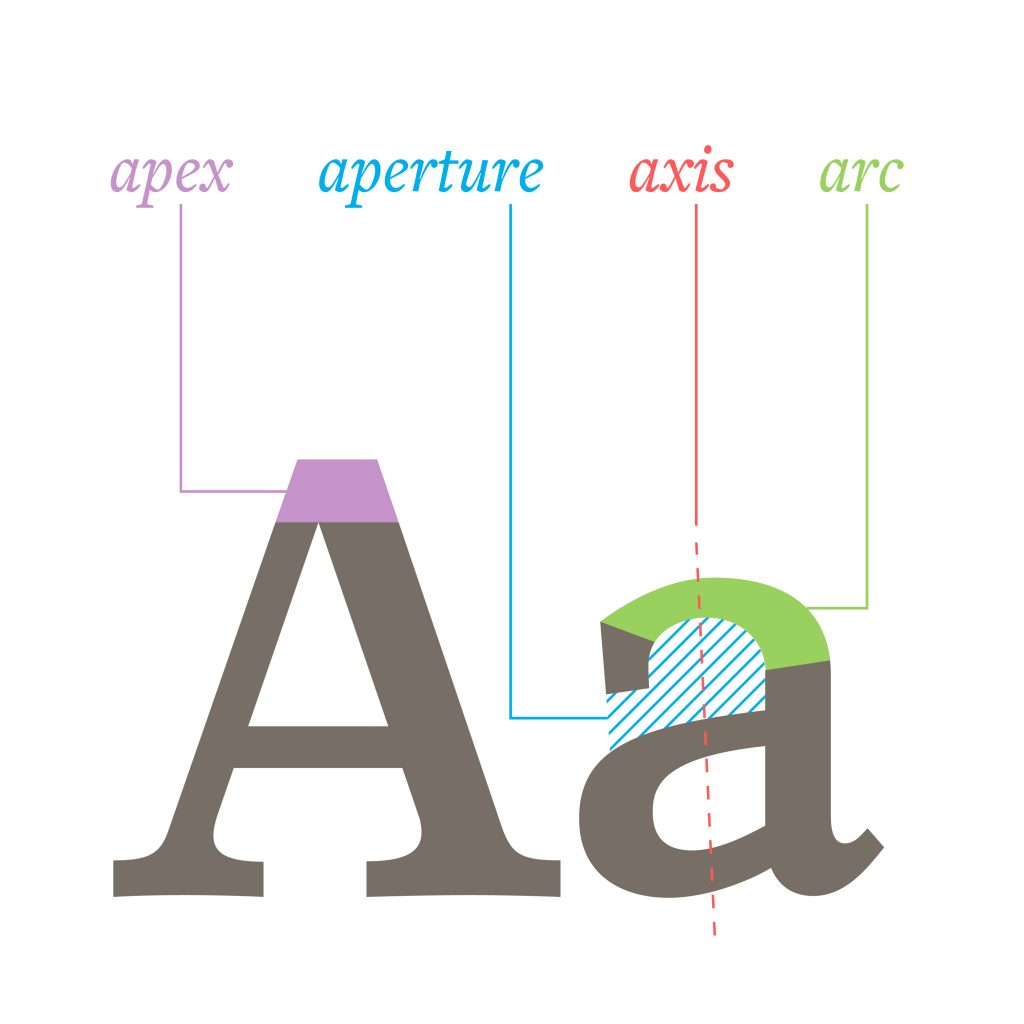 Arc—a curved portion of a stroke. 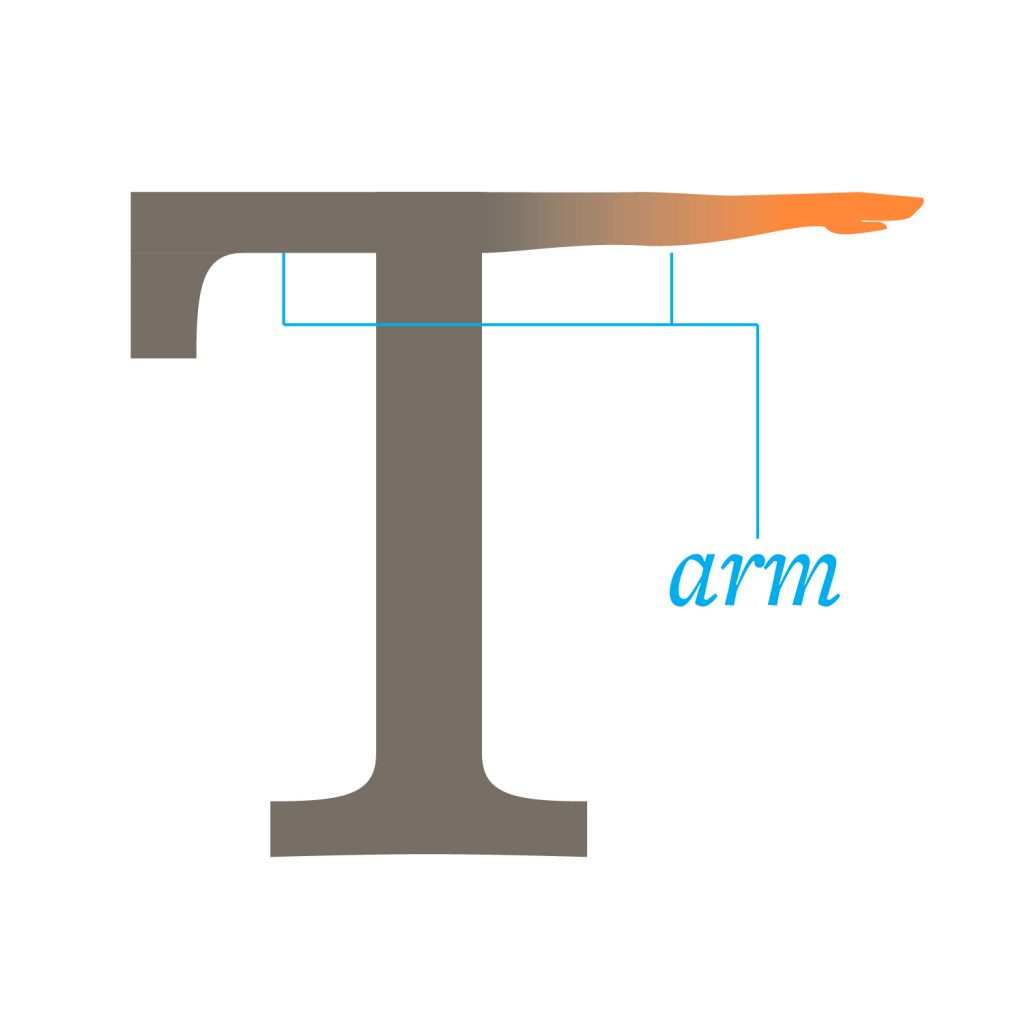 Arm—a horizontal or upward stroke that does not connect with a stem on at least one end.

Ascender—portion of the lowercase that rises above the x-height. 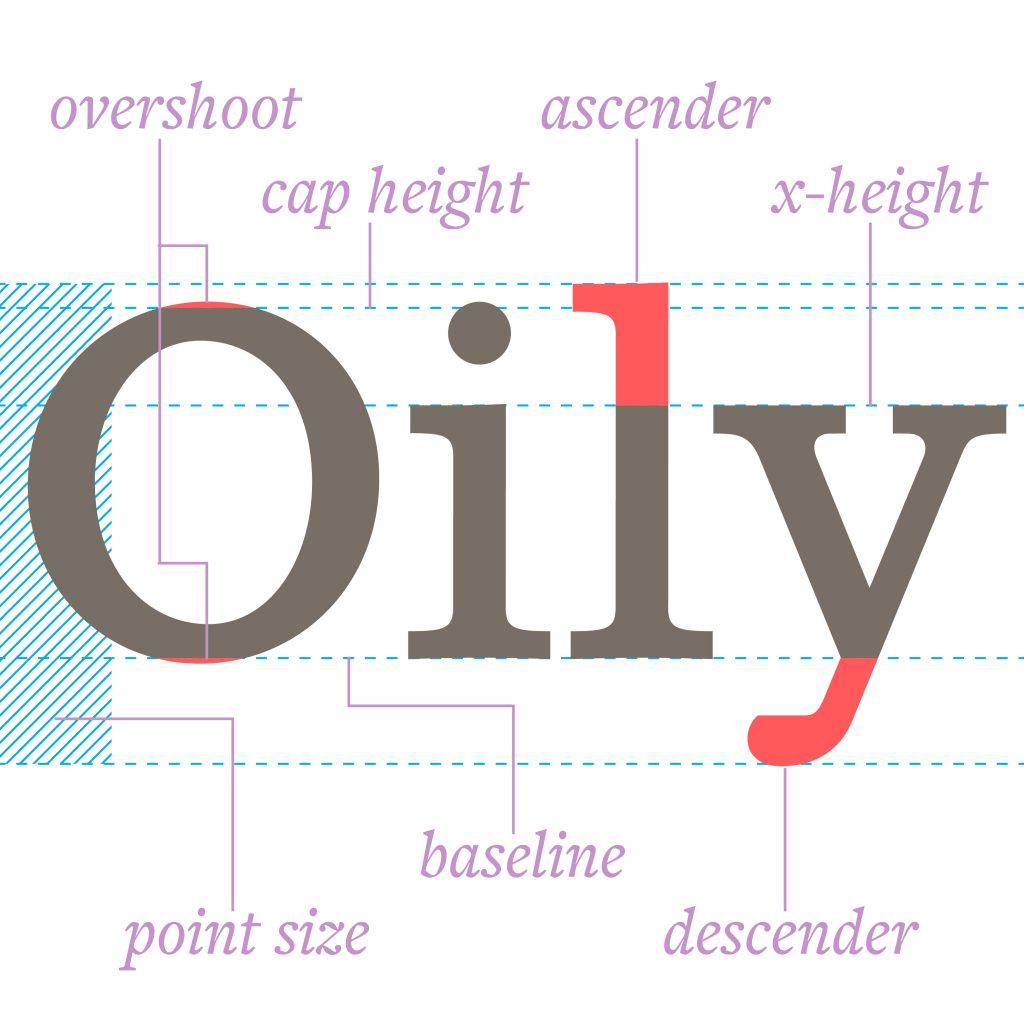 Baseline—the line on which the letters of a font seem to rest. 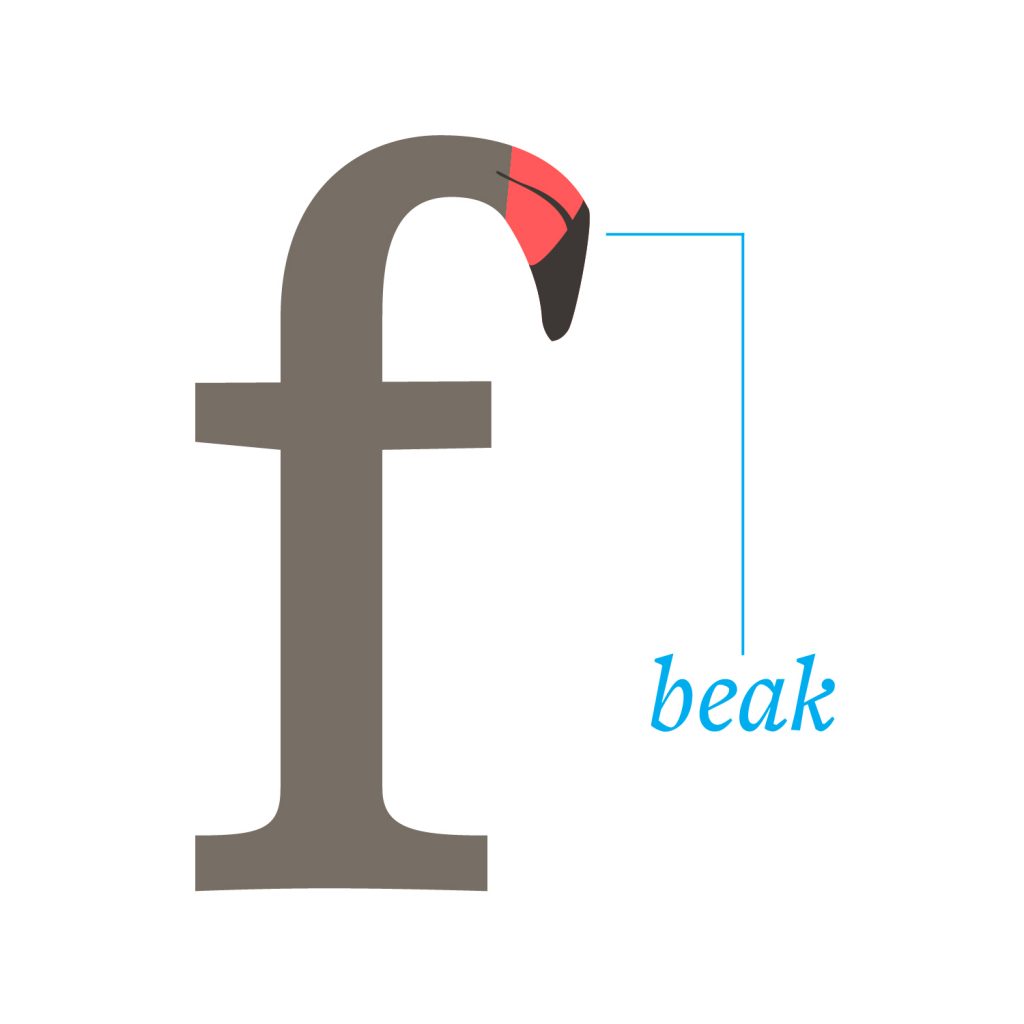 Bowl—the curved part of a letter surrounding a counter.

Bracket—a curved or wedge-like connection between a serif and the main stroke. 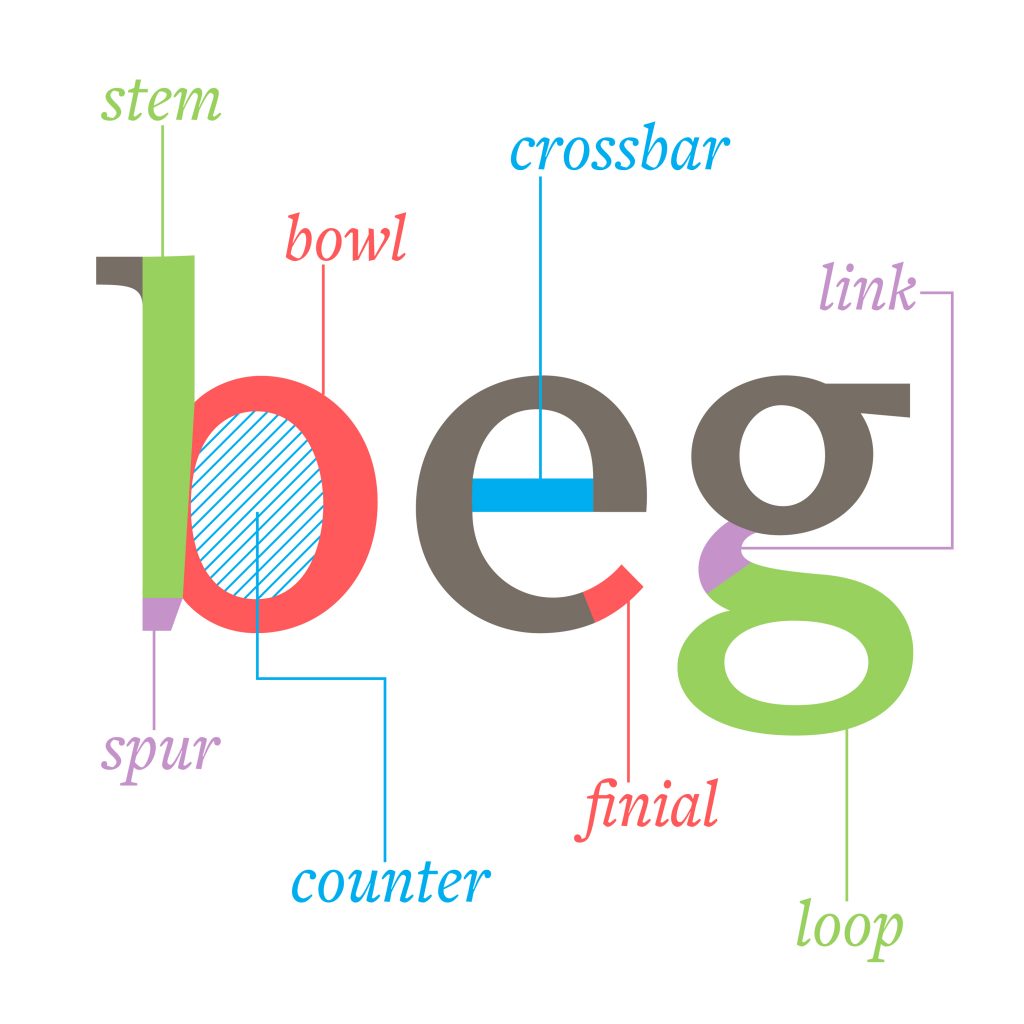 Cap height—the distance from the baseline to the top of the uppercase letters.

Character—a symbol with a unique linguistic meaning, such as a letter, number, punctuation mark, etc. 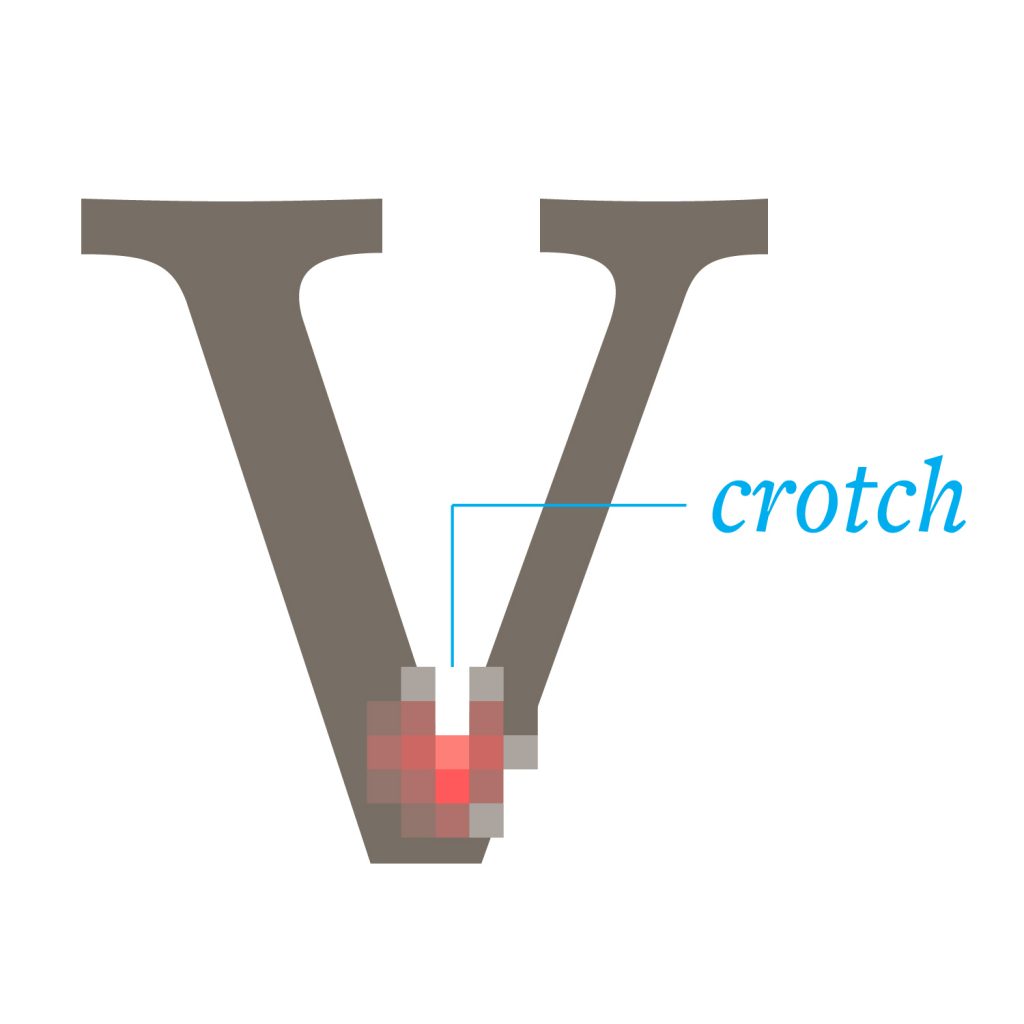 Descender—portion of the lowercase which extends below the baseline. 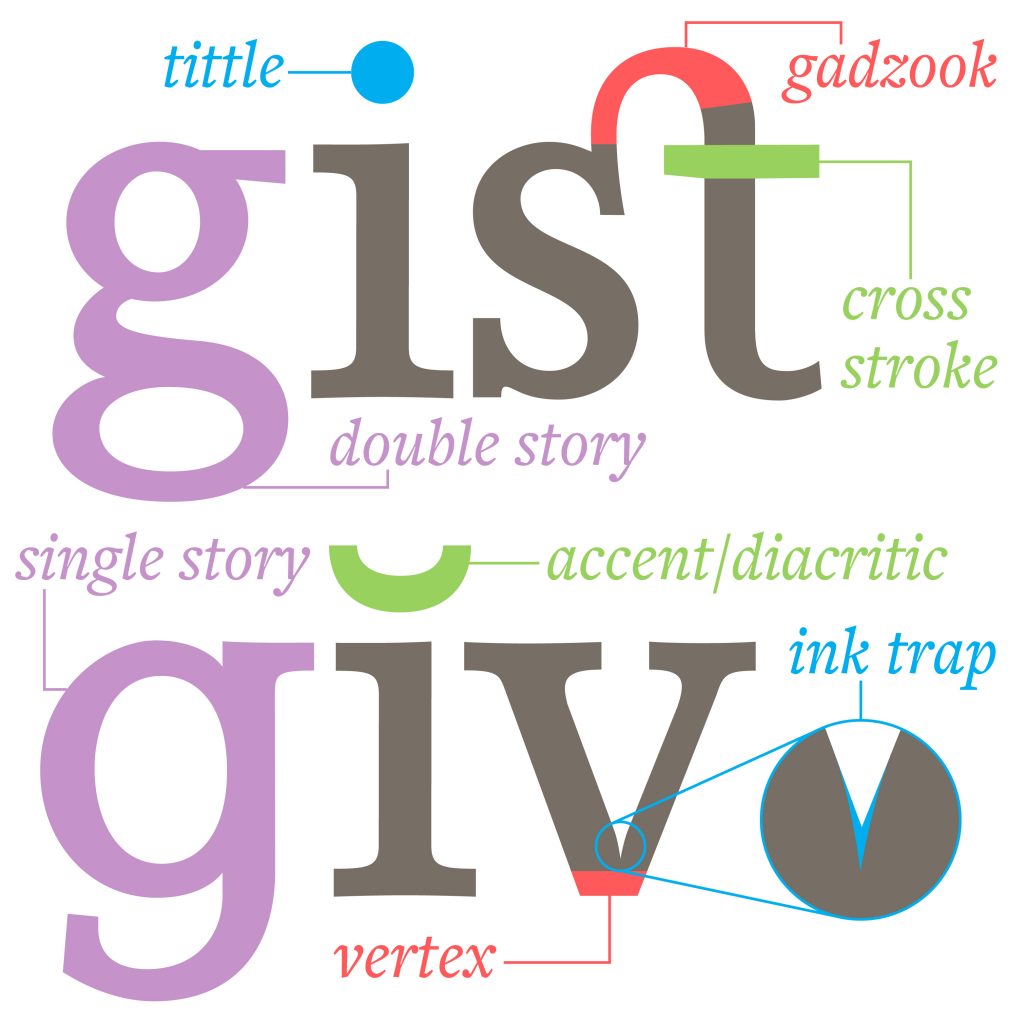 Diacritic—an ancilliary mark or sign added to a letter. Accents are a type of diacritic used with the Latin alphabet to denote a specific pronounciation. Other writing systems may use diacritics to indicate sounds beyond the basic alphabet.

Double story—a version of ‘a’ or ‘g’ with two counters, as opposed to a single story. 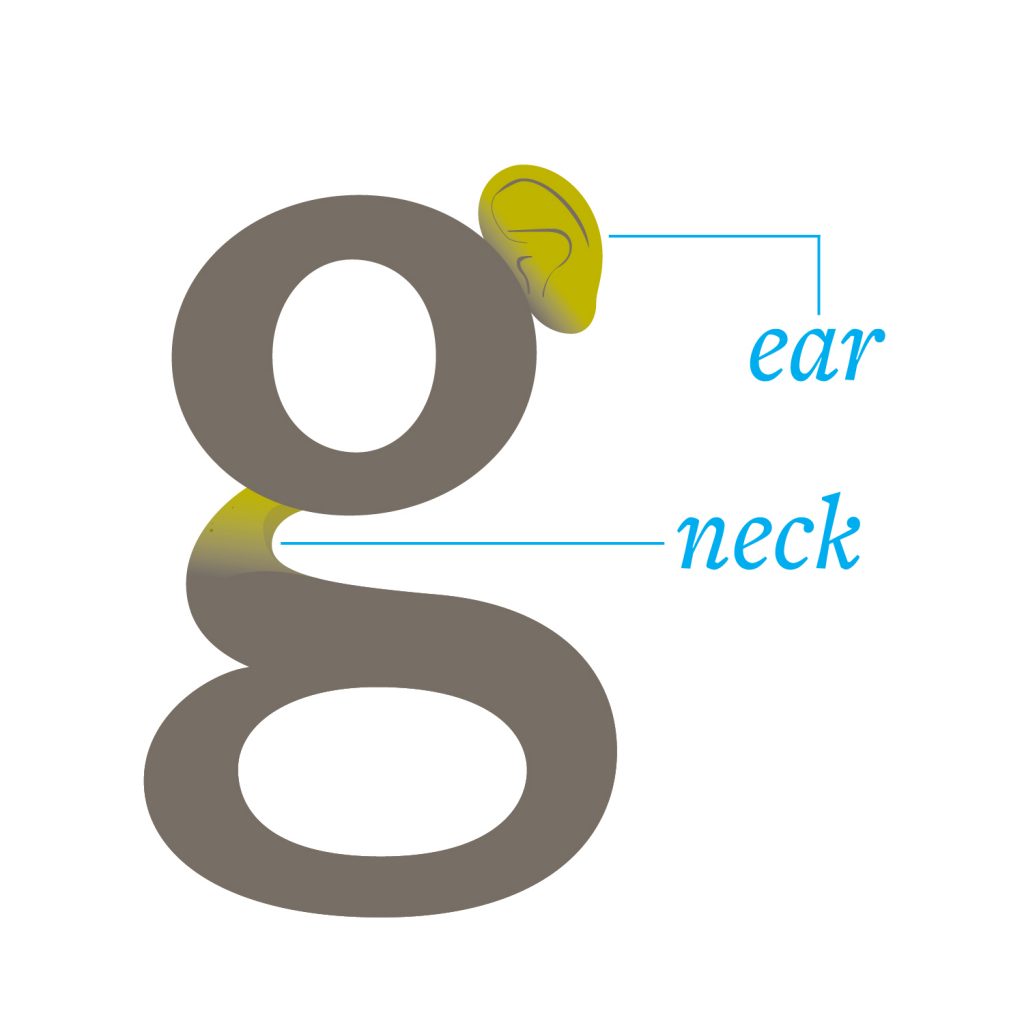 Ear—that funny bit on the top right of a double story ‘g’. 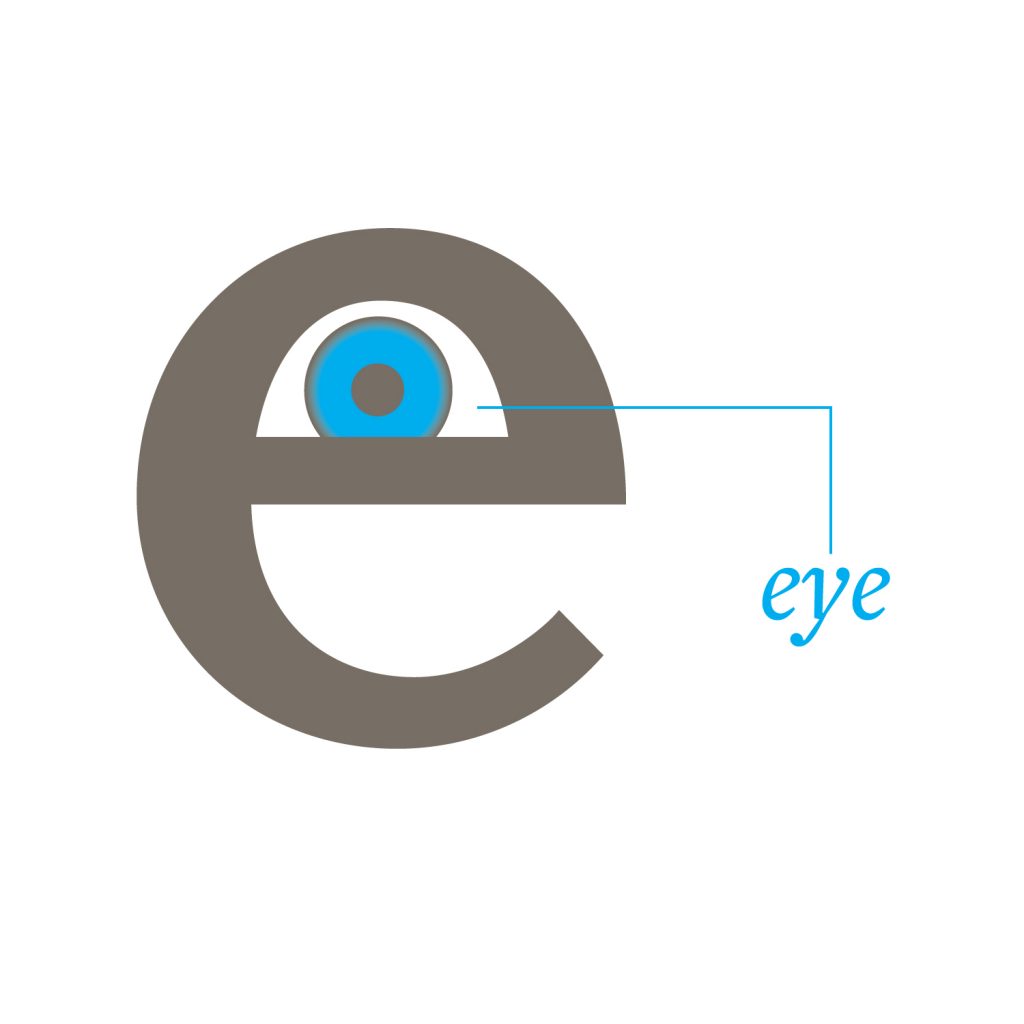 Eye—the counter of the lowercase ‘e’. 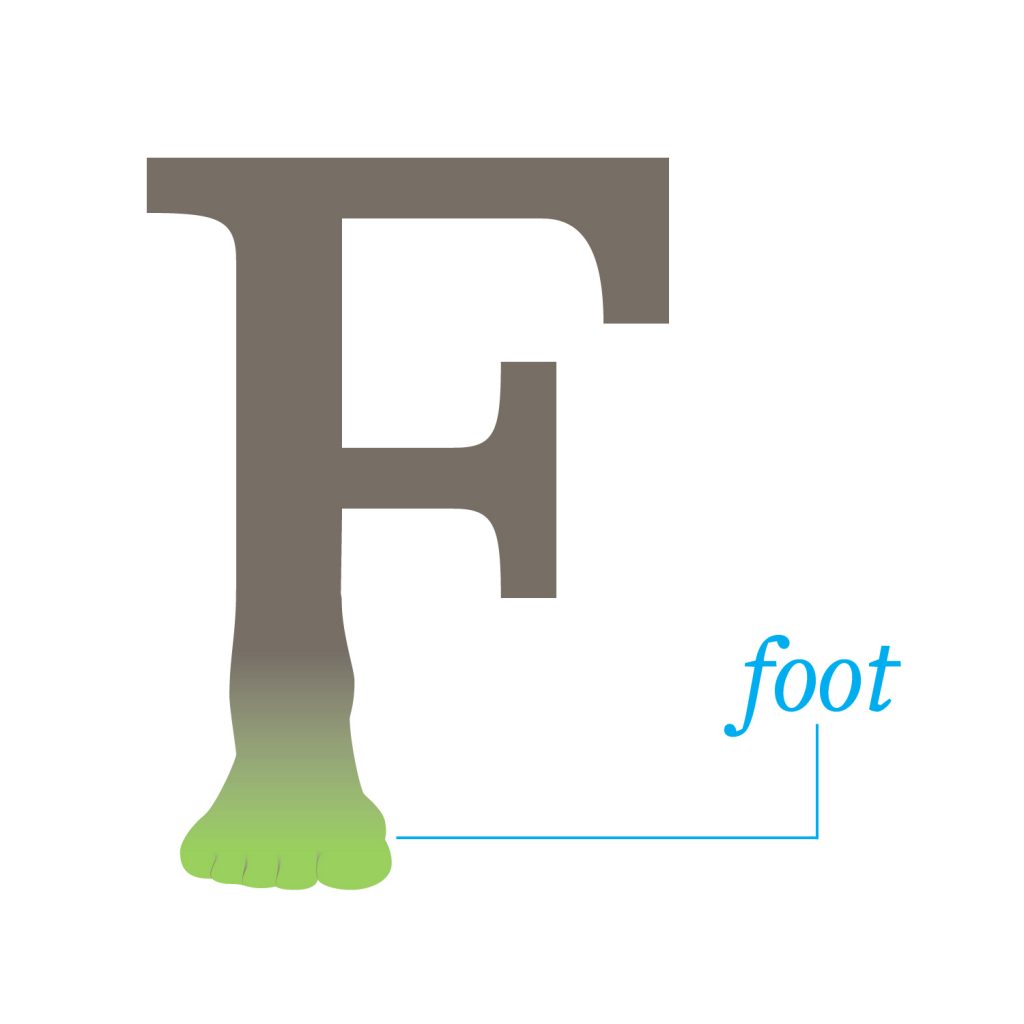 Foot—the end of a stem or stroke resting on the baseline.

Gadzook—a decorative detail connecting the letters in a ligature but is not a stroke essential to either letter. 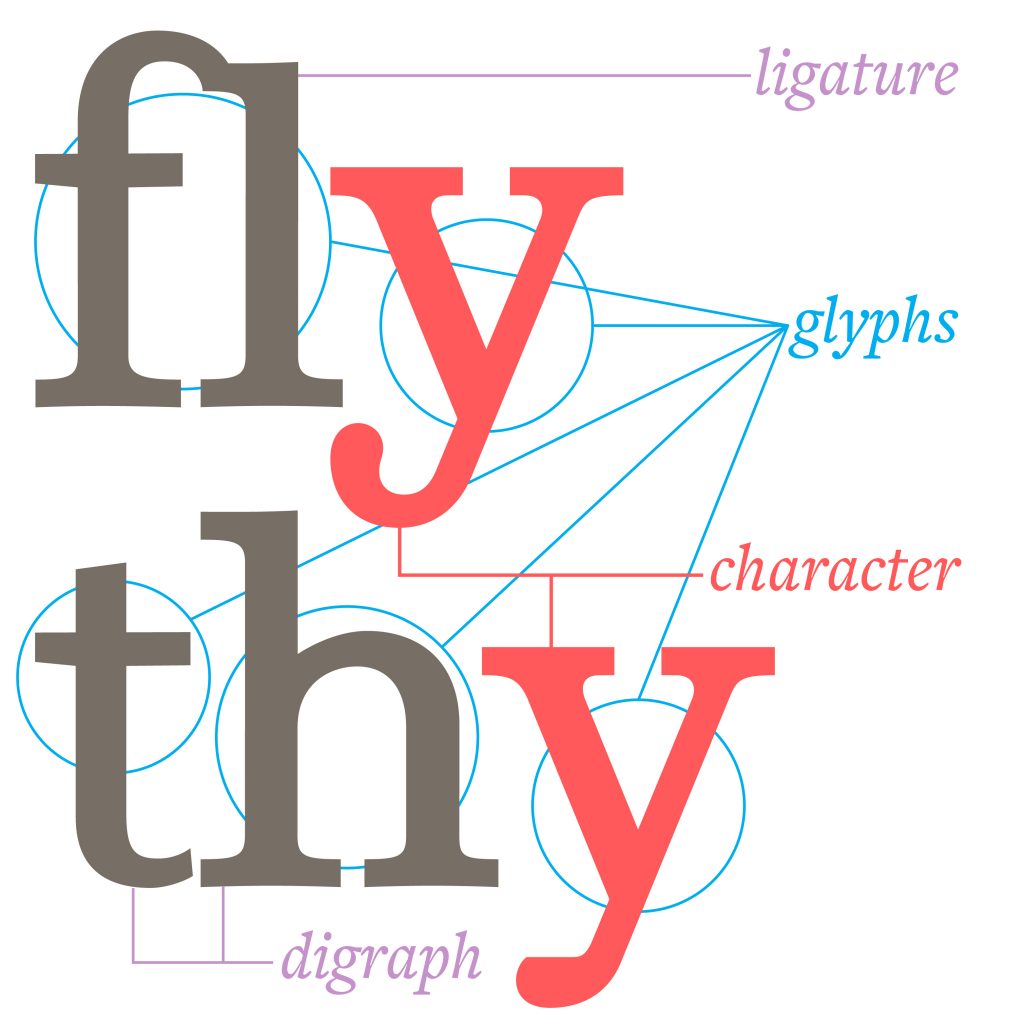 Glyph—a unique drawing of a character or characters as a single unit. (For instance, a single character may have more than one glyph, like the y’s above. Or there may be multiple characters in a single glyph, as in a ligature.)

Ink trap—additional space added where two strokes form an acute angle, done to avoid ink build-up in that spot when the character is printed. It’s a space designed to literally trap excess ink.

Joint—the place where a stroke joins a stem. 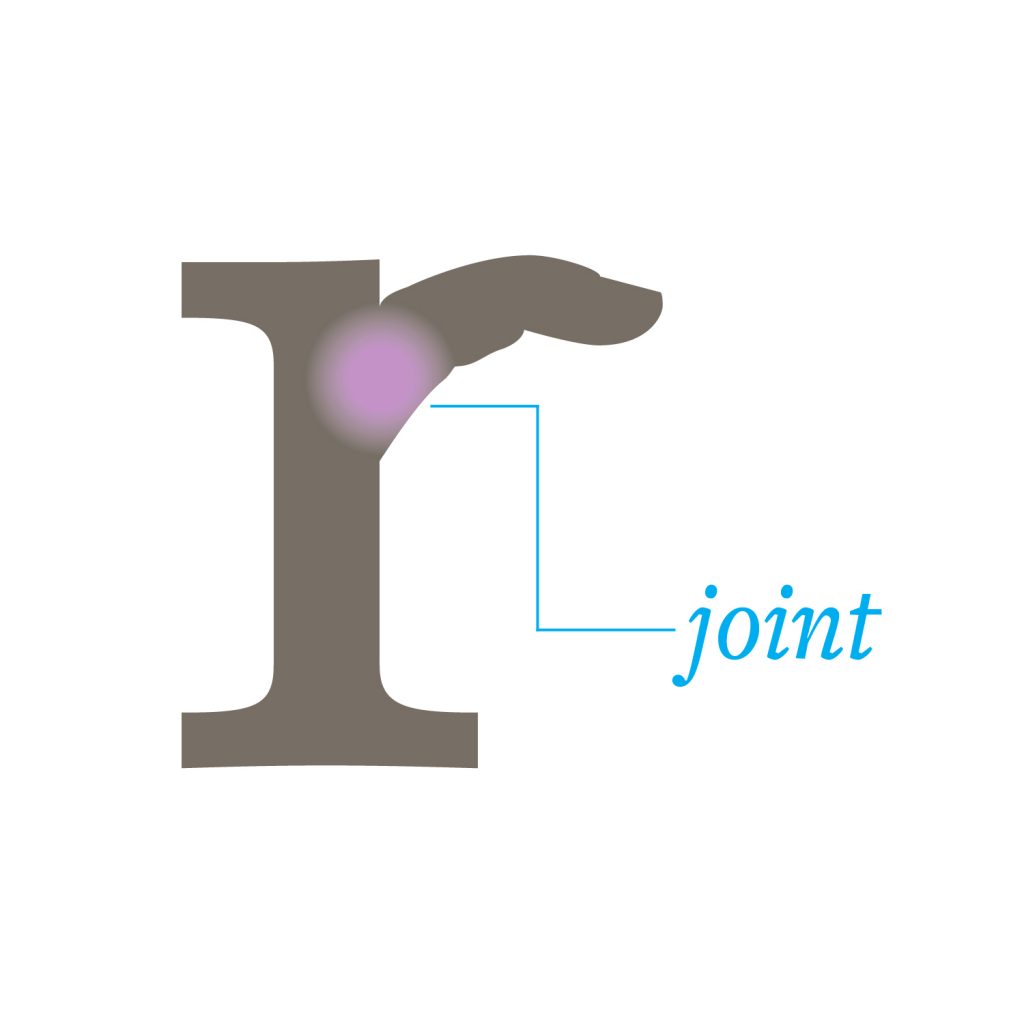 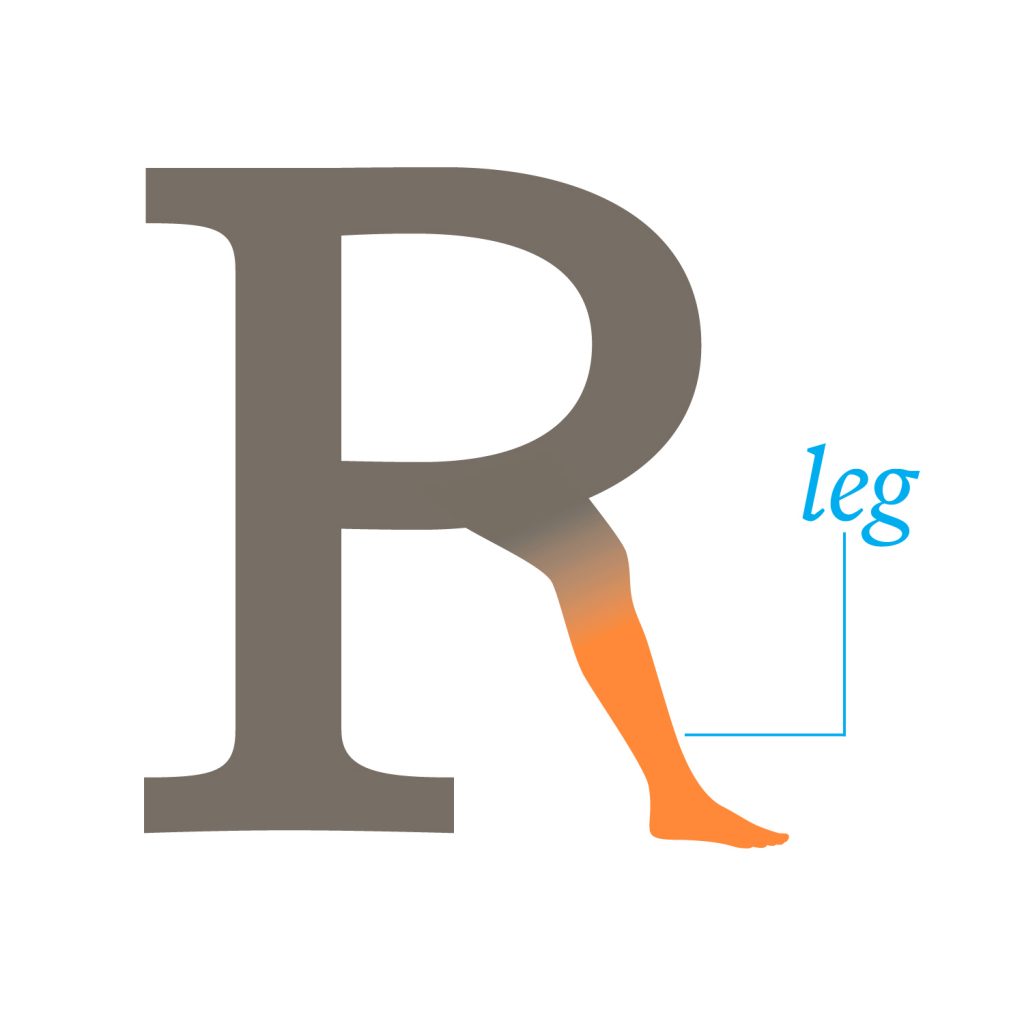 Ligature—two or more characters joined to make a single glyph. (The ‘fl’ ligature above is common. The ampersand is a ligature of ‘et’, meaning “and” in Latin.) 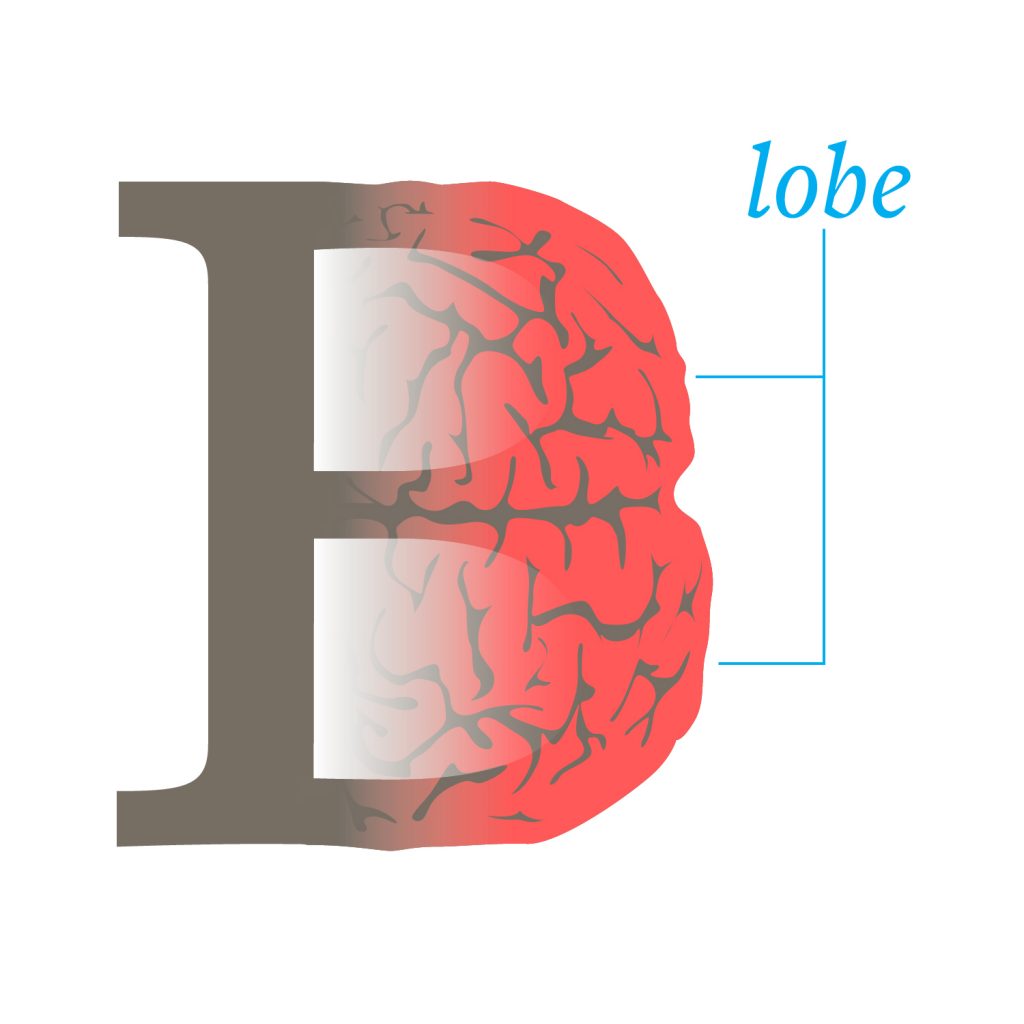 Lobe—a curved or rounded projection from the stem or main portion of the letter.

Loop—the bowl below the baseline on a double story lowercase ‘g’.

Lowercase—the smaller form of the bicameral Latin alphabet based on the Carolingian minuscule.

Neck—also known as a collar or link, the stroke that connects the top and bottom portions of a lowercase ‘g’.

Overshoot—portion of a letter pushing just beyond a line of measurement to achieve the appearance of being the same height as comparable letters. 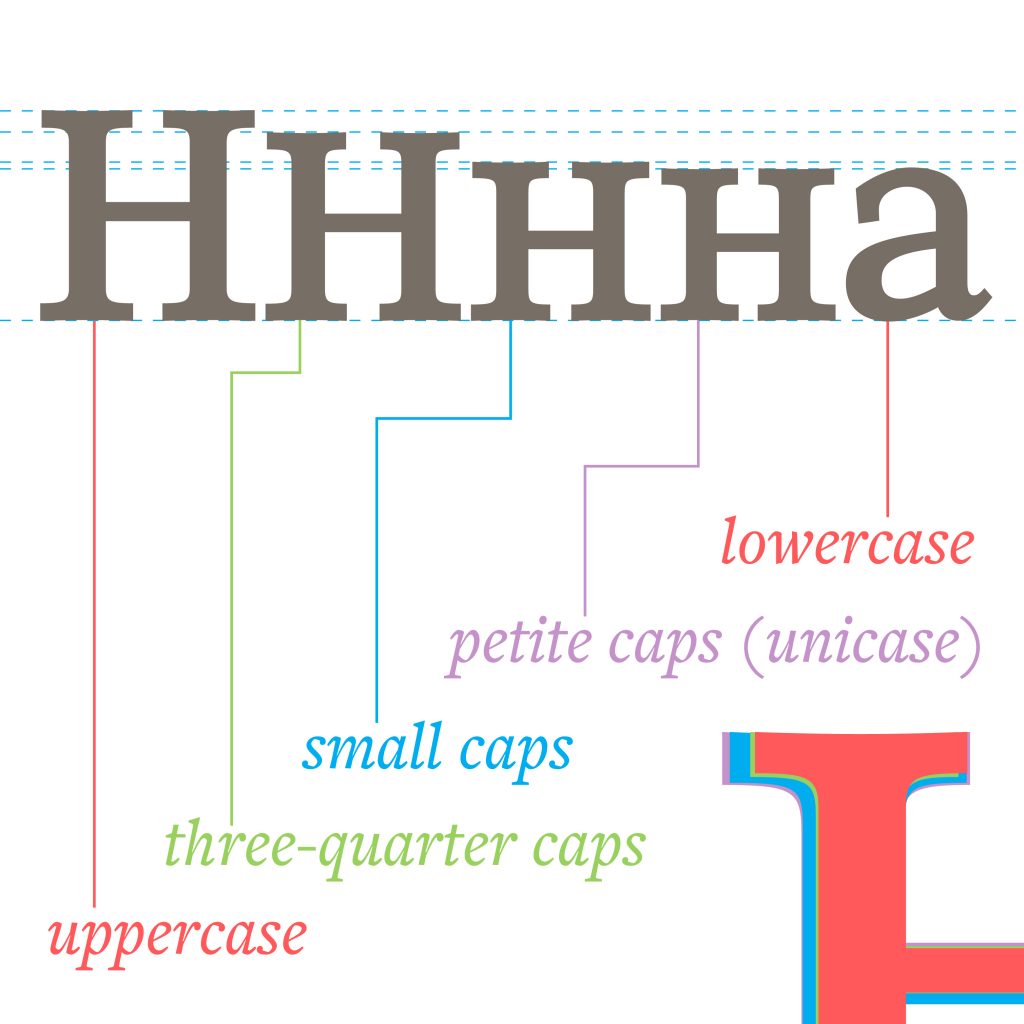 Petit caps—uppercase letters sized the same as the x-height of the lowercase. Used in conjunction with lowercase they can form a unicase font: a font with all letterforms the same height.

Serif—a small stroke added to the end of a main stroke. 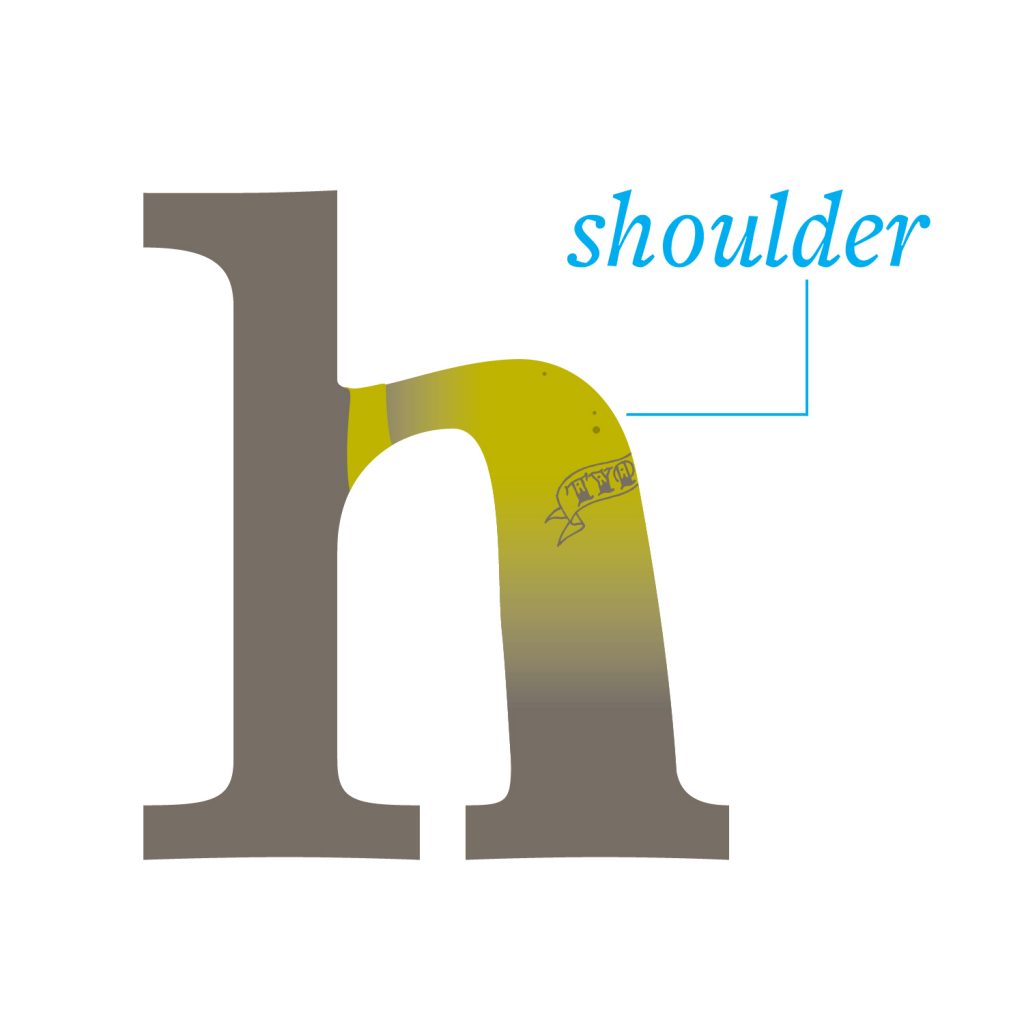 Single story—a version of ‘a’ or ‘g’ with one counter, as opposed to a double story.

Slab serif—a serif with little to no contrast in width to the main stroke. 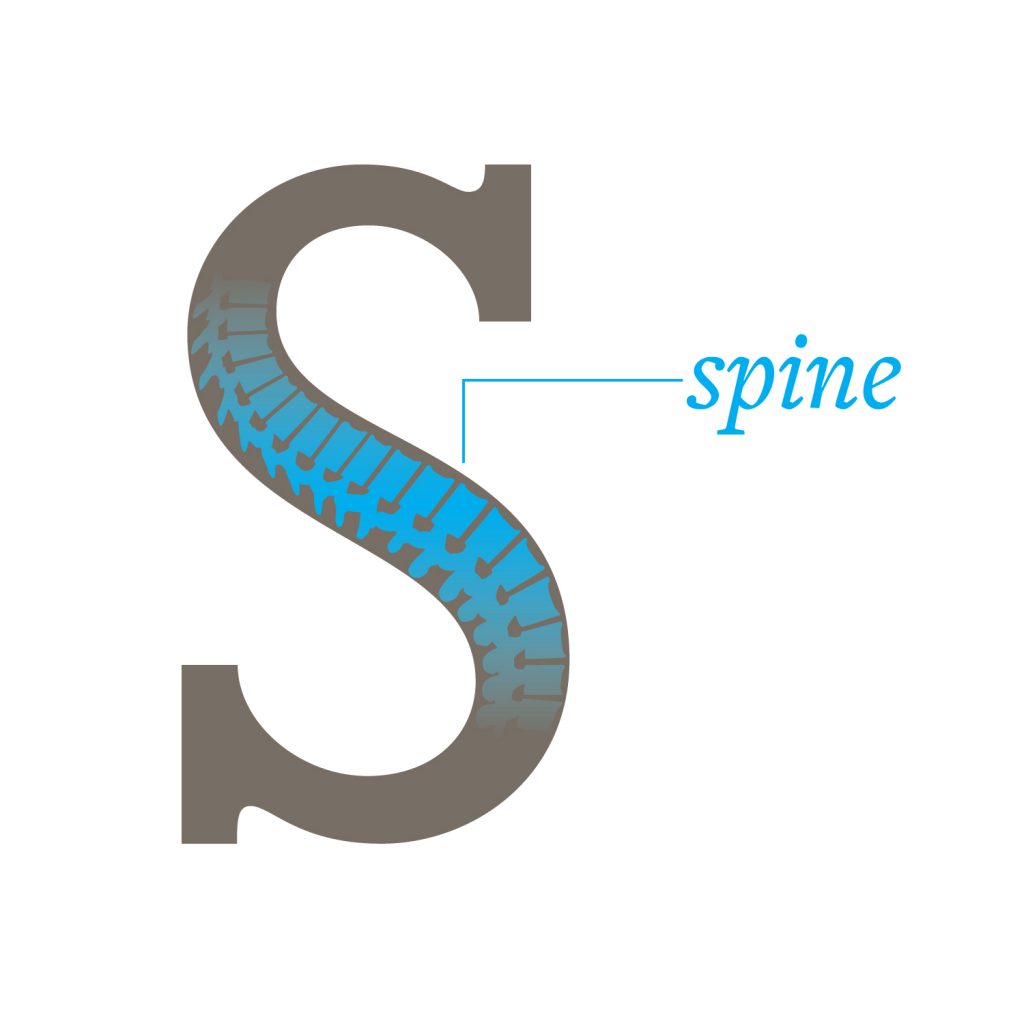 Spine—the primary curved stroke of the letter ‘S’ or ‘s’.

Stroke—a line forming part of a written or printed character.

Swash—an addition at the end of a stroke intended to beautify or add other visual interest to a glyph beyond what is necessary to define a character.

Tail—the descending, often decorative, stroke of the ‘Q’, and sometimes ‘R’ or ‘K’. 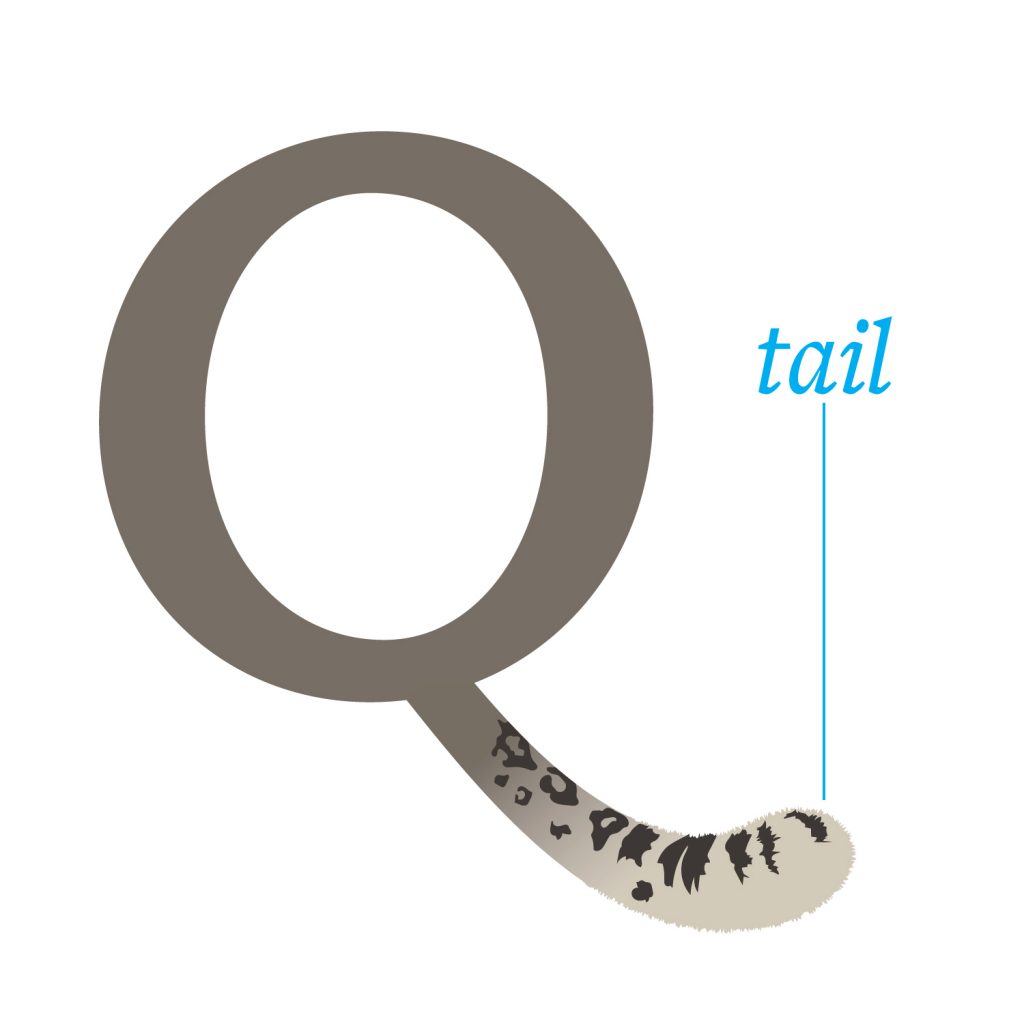 Terminal—the end of a stroke. 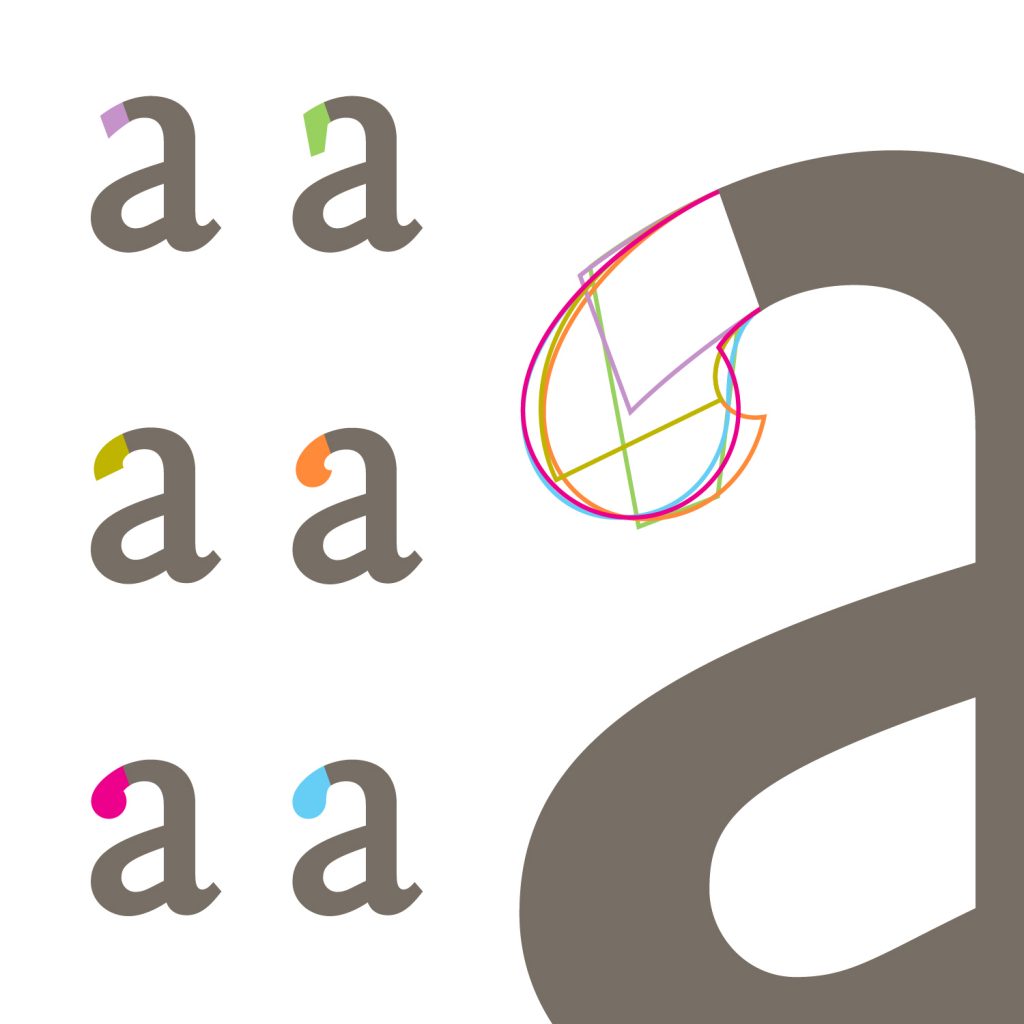 Three-quarter caps—uppercase sized about halfway between the x-height and cap height, typically used for acronyms.

Uppercase—the larger form of the Latin bicameral alphabet based on Roman capitals.