Working to build the character set, I have to figure out where to start. Building a font means building a system of interlinked glyphs. Each one relates to the other in a variety of ways. I can maintain unity through repetition of certain characteristics throughout the character set. Ultimately, I want to be able to put any combination, quantity, and kind of charater from my font in a layout and have it look coherent and consistent.

Typographers refer to the visual consistency as “color.” This isn’t just repetition of forms, but rather an overall texture and shade of grey when repeated across the page, without obvious glaring spots of white or black.

Color is determined by the negative space in concert with the positive shapes of the glyphs. The counters and spacing are every bit as important as the strokes.

Because lowercase is used far more often than uppercase, it is wise to start with the lowercase design. It could be argued that the font I’m making lends itself more to use of the uppercase. Even if this were so (and I don’t believe it is), I have to consider the counters, the negative space first.

If I design the uppercase alphabet with counters that are too small, the lowercase will need to match that characteristic, and it may render the whitespace in the lowercase so minimal that the lowercase is illegible. In that case it would fail to meet the requirements of the brief.

So I’m beginning with the lowercase.

Where do I start?

When designing the alphabet, type designers don’t start with “a” and work alphabetically. They start with the letters whose characteristics overlap with the greatest number of other similar letters. This way a couple characters can inform the rest, making it easier to make design decisions as I go. 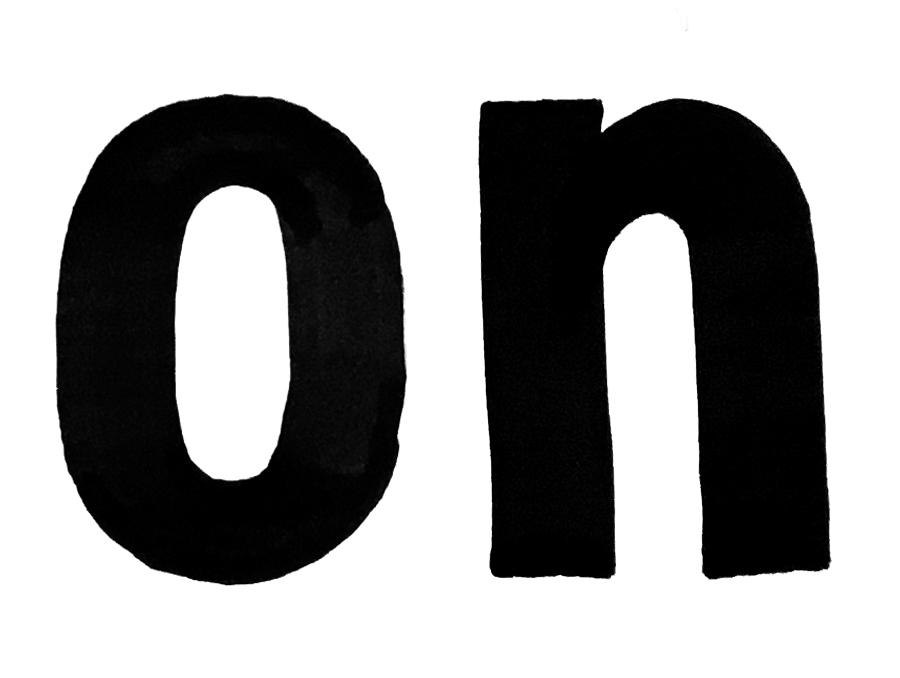 Drawing the “n” on paper with my gigantic Sharpie®, I considered a few things:

Limitations of the Tool

Making a font informed by a tool (in this case a Sharpie® Magnum®), I kinda just have to get used to using the thing. It’s quite a bit different than pencil or pen. I can’t outline and fill in or start with a skeleton and build up the way I would with pencil. I don’t have the flexibility and maneuverability of a brush pen or pointed nib.

These limitations are actually really good. They make decisions for me and determine how the letters look. If I can’t do it with the marker, then it isn’t an option. Decision made.

I like basing the width of the downstroke on a single Magnum® nib width. And I can only go so thin with the corner of this chunky thing. It’s quite refreshing.

Speaking of strokes, I decided based on my research that this would be a low contrast typeface. I don’t really see Bodoni-like high contrast characters on protest posters, and if I did they wouldn’t be terribly legible. I want to own the chunky marker look!

Drawing the “n” I realized that the joint is pretty chunky. There’s a lot of weight where the shoulder meets the stem. This could be endearingly amateurish, but mostly it just throws off the overall color of the typeface. (An offputting black spot in a line of even color.) There’s enough marker-ly charm in being hand-drawn without making the forms less than optimal.

So to fix this I tried making the terminal diagonal, to cut into that black mass. It didn’t work, but it gave me another design option to consider later.

In the meantime I fooled around with the way I rotated the marker as I moved my hand to make the turn in the shoulder. That seemed to do the trick, as I was able to reduce the width of the stroke as it moved into the stem. 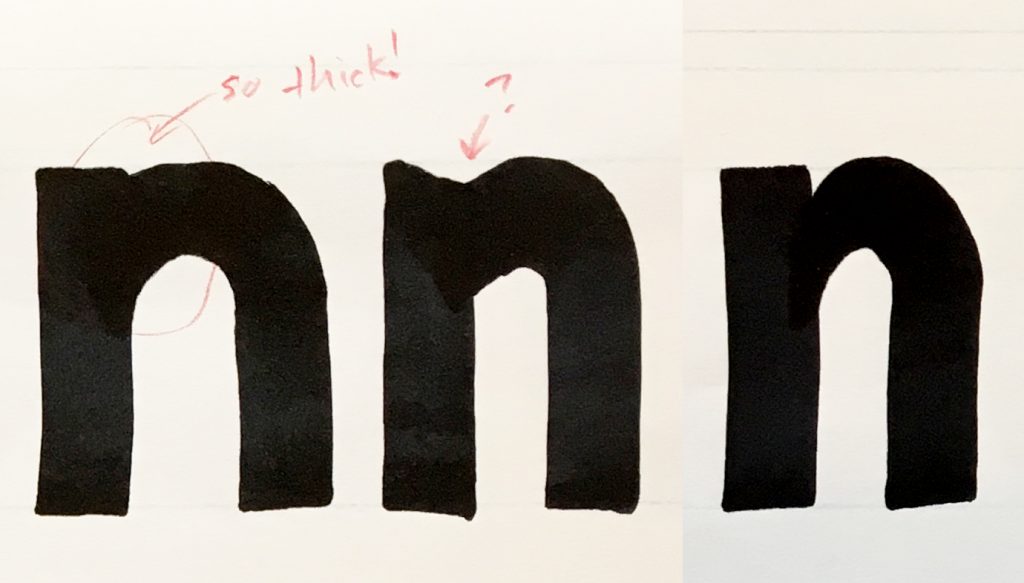 Now I had to decide if I liked the diagonal on the top of the stem. It worked for my test lowercase “g” earlier, so why not now? I ended up going in favor of the flat terminal for two reasons:

When I first started drawing the “n” it was pretty wide. Rather, it was standard proportion, but wide for a font that’s supposed to be condensed according to my brief. I worked on narrowing it until it got a little too condensed. I realized that when I get to things like the “e” it might be a bit difficult to match the color of a really condensed letterform with the limitations of my tool. So I found what I hope is a happy medium. 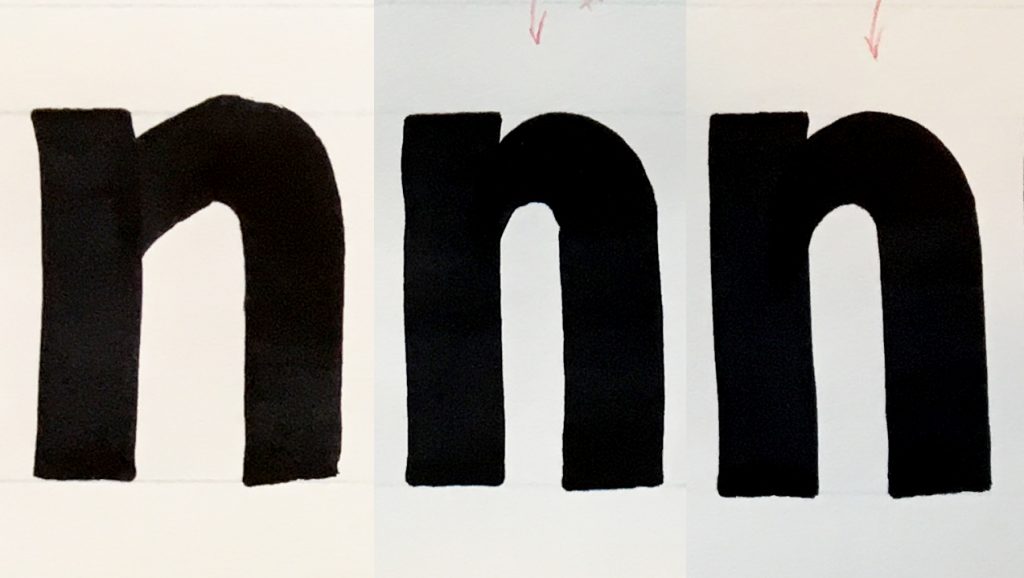 Notice I talk about counter size about as much as character width. The counters will inform the width, and the width informs the counters. It’s a push pull. But I always have to have my eye on the negative space.

I looked at the “n” to gauge the area of the “o” counter. I want these to be similar. Beyond that it was a matter of making a letter that looked right being drawn with a super chunky implement.

I realized that making the top and bottom of the “o” as thick as the sides just looked awkward. Plus, it forced me to make a rounder, less consdensed form if I wanted the counter to be large enough to work with the “n”. So I made the top and bottom thinner by not turning the marker, and by filling in or fleshing out space with the corner edge of the marker.

Drawing the “o” is really an exercise in repetition, patience, and persistence. 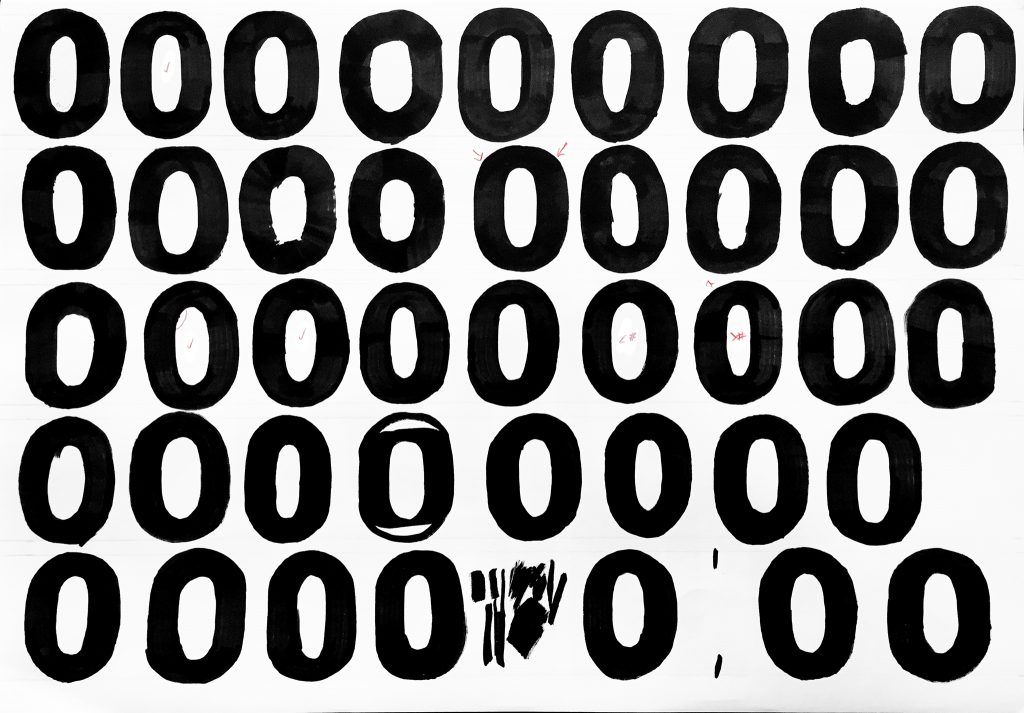