Last week I did “m”, “r” and “u”, highlighting some nuanced but vital differences in arc forms in the process. This week I stuck with my plan and did “g” and “y” to get some descenders out of the way.

I did these with the thought that they might have some similarity of form in the descender to work with. Nope. I’m not sure why I assumed that. It wasn’t very well thought through. But it didn’t hurt anything either—I got them done.

Once again, practice played into the creation of the forms. Having already done a single story “a”, the single story “g” wasn’t too difficult. The top portion was basically the “a” with one key difference: the joint on the bottom of the bowl is a bit more fleshed out. It’s a subtle and not hugely important difference. And it was largely a design decision on my part. It just seemed to look better.

Knowing what I needed with the top portion, I was able to focus on getting the curve of the descender right. I wanted it to follow the lower curve of the bowl above it, creating almost two parallel lines. This was one of the reasons for making the joint the way I did, so those lines could remain parallel.

The “y” involved more experimentation than “g”. I had not practiced any of the shapes going into the “y” before, as this is the first diagonal letter I’ve done for the lowercase.

I tried some curvier shapes, a curved joint, a stroke on the left that doesn’t overlap completely at the joint with the other stroke. None of this seemed to work. I knew generally what I wanted out of the descender, but I had to experiment with how to make it. Should I go from bottom to top? Top to bottom? How should I orient the marker? Should I do it in two strokes, one from one direction and one from the other? 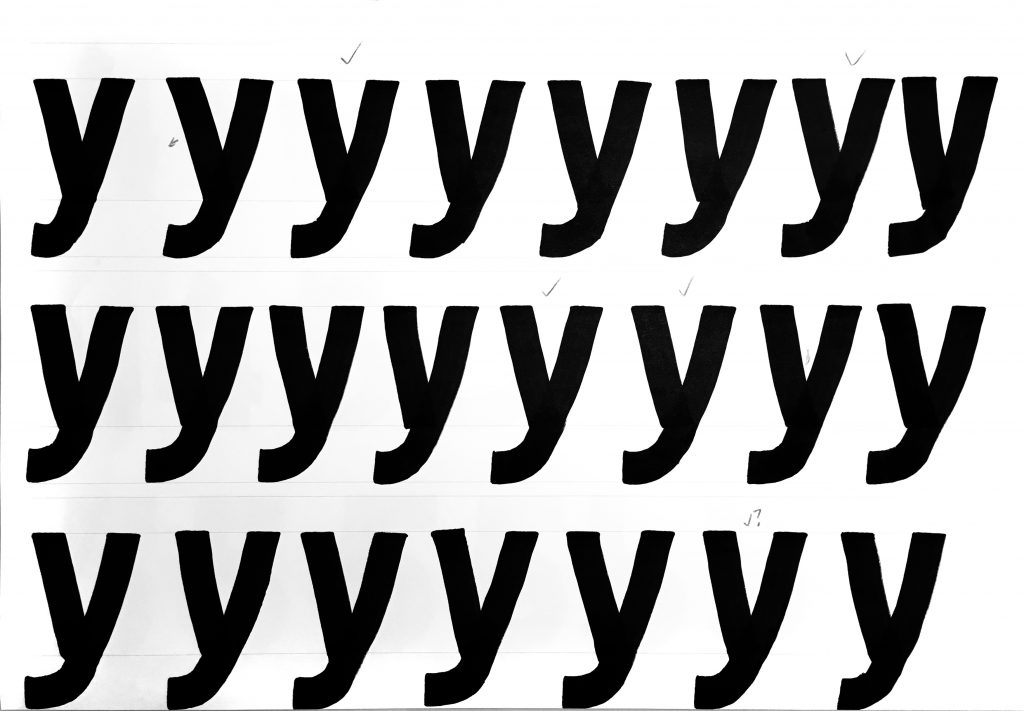 What I settled on was making a “v” and allowing the right stroke to run below the baseline a little. Then I drew the descender from the bottom up to meet that stroke. It worked out pretty well.