Last week the focus was on round letters “c” and “e” and a letter related to “d”, the sigle story “a”. It was a bit scattered, as “a” was closer in form to the letters I did the week before. So last week I aslo planned out my letter groups a bit better.

The letters “m”, “r” and “u” relate very closely to the “n” form, but are surprisingly different in some subtle but critical ways.

Not all arcs are created the same

The lowercase “n” is basically a vertical stem joined on the right by an arc curving down into another vertical stroke. An “m” is basically the same thing plus another arc-stroke attached again on the right. It’s tempting to just repeat the same arc as the first and call it good, but of course it’s not so simple.

An “m”, like the “n”, has an arc that meets the stem with a somewhat modified joint. The place where the arc meets the stem has a lot of ink, and ends up looking too heavy (as discussed in an earlier post). So I built in an ink trap to put more space between the arc and stem. This helps to keep the two pieces distinctly separate, rather than blobbing together and creating a heavy mass. 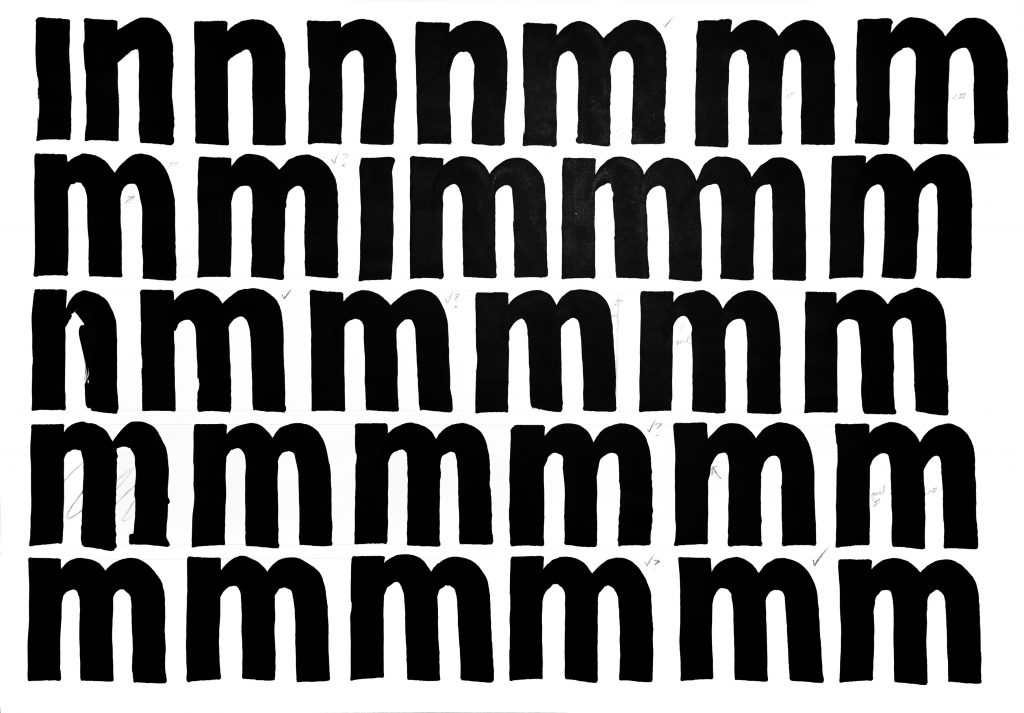 If the second joint were the same as the first, it would leave too much room, and the rhythm of the letter would be off. When I make the “m”, I add a bit of weight to the arc at the joint to make up the difference in negative space, so it approximates the space at the first joint.

The letter “r” looks like an “n” without the second vertical stroke. The arc just ends. The ending, or terminal, often has a terminal stroke of some kind, especially with serif typefaces. For a hand-drawn sans serif font, it’s a bit simpler, but simpler doesn’t always mean easier.

The thing with “r” is that it leaves all this space on the right side. When paired with other letters, this can make the spacing awkward. All that space on the right can also make the character seem off balance. With an arc up top, it can feel like the center of gravity on “r” is too high. It’s like the top heavey letter might fall on its arc at any moment.

So how to balance the right and left sides of a character whose form doesn’t have much to work with on one side? 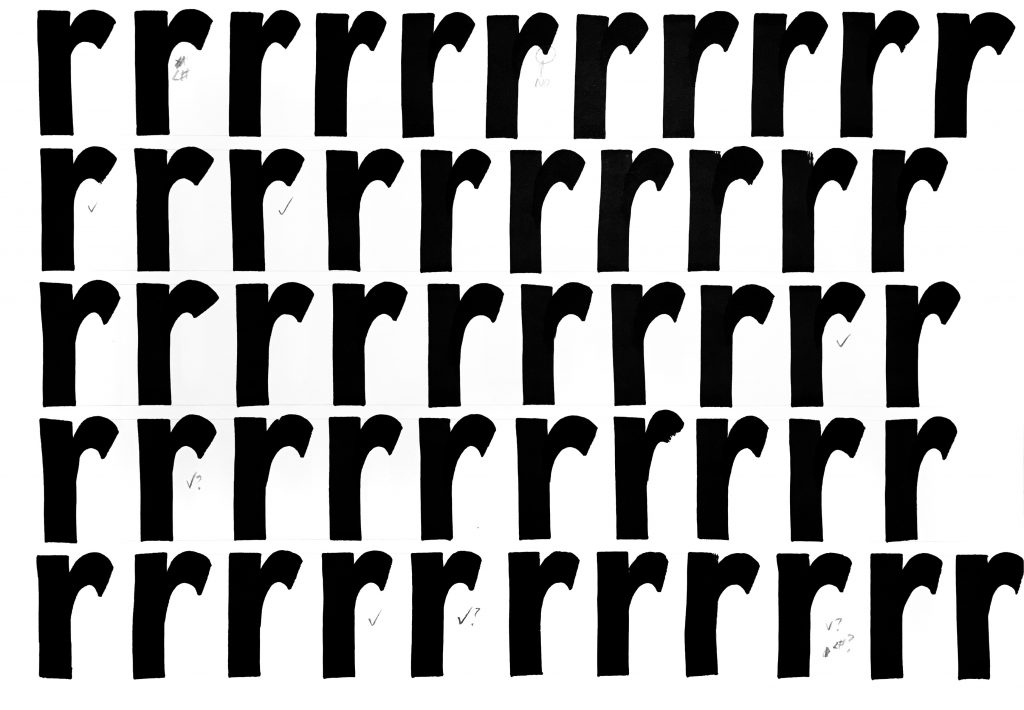 The trick has to do with that center of gravity. If it’s top heavy with the arc, then bring the arc down. Bringing the right side down is not an option. It would get in the way of an adjacent letter, or start to look like an “n”. But…

If I move the left side of the arc—the joint—down, it shifts the center of gravity down.

This doesn’t necessarily mean the space at the top of the koint needs to be greater, but it does mean the angle at which the arc joins the stem changes so there’s more weight firther down the stem.

It’s the little things that make a difference.

Consider how the tool moves

The last thing I worked on this week was the “u”. It might seem as simple as turning the “n” upsidedown, but that would be too easy.

If I try to draw an upsidedown “n”… yeah, it’s just all sorts of bad. The bottom feels too thick, the pen feels harder to move, the counter feels too light, the letter feels too tall… and the list goes on. Here are a few things I did to help fix some of these problems: 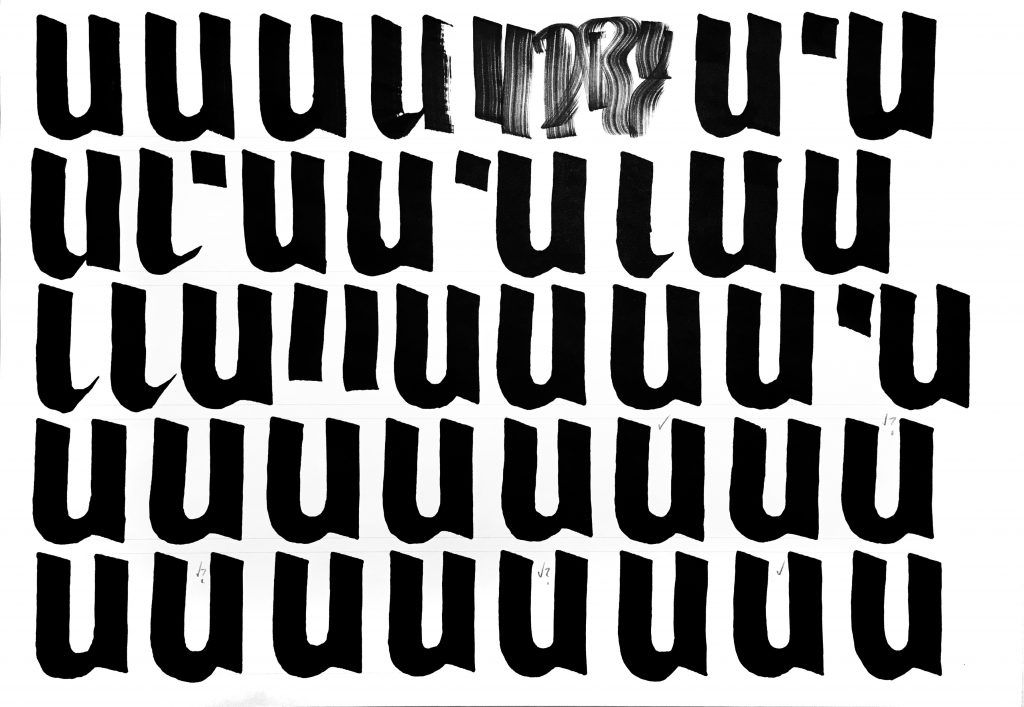 Along with some of these things, I just had to practice making “u” forms over and over again. Using the pen and allowing the tool to show me what it wants to do helped me control where the strokes go and how to form the letter more naturally.

All in all, these glyphs just reinforced the idea that I need to keep drawing. To be fair, though, I have read quite a lot about type design, so I anticipated some of these problems, and knew the solutions ahead of time. It was just interesting to see the problems present themselves as I drew the letters, even as I might have tried to prevent these problems of form from the outset.